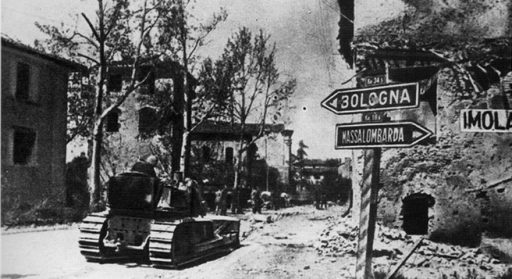 Driving away from Imola along SP Montanara at the entrance to the Santerno valley you get to Borgo Tossignano.
After the breakthrough on the Gothic Line at Passo del Giogo near Firenzuola the front moved forward along the course of River Santerno and stopped at Fontanelice and Borgo Tossignano for the whole of the winter of 1944-45. Tossignano’s medieval part above the modern settlement was occupied by the Germans for the duration of the war and totally destroyed by Allied bombardments. Only the ruins of the medieval castle survived. 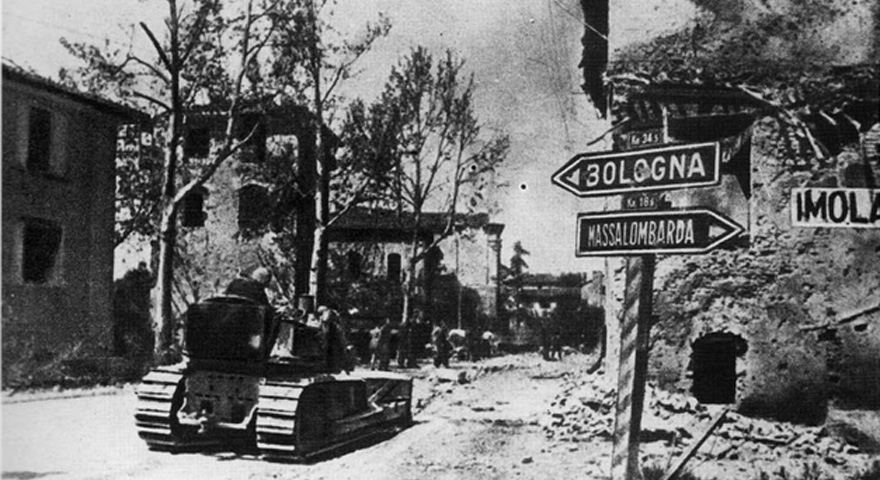 14 km further on, Renaissance Palazzo Alidosi marks the entrance to Castel del Rio.
The building’s war museum is an indispensable aid to understanding what happened in the two world wars in this area and for advice on the most interesting themed itineraries it offers. In front of Palazzo Alidosi is a road which descends to the fifteenth century Ponte Alidosi bridge, a listed building which rests on a single 18 metre high, 42 metre long arch.

There are many sights around Castel del Rio which show signs of the harsh fighting of Second World War here including Monte Battaglia (battle) which was given this name because of its great symbolic value.
On the border ridge between Romagna and Tuscany this mountain has historically accorded it great strategic significance as the ruins of its medieval towers show. Between 26th September and 11th October 1944 one of the bloodiest battles in the Italian campaign was fought on this high ground between Anglo American forces assisted by the partisans of the 36th Brigata Garibaldi on one side and a few divisions of German troops on the other causing thousands of deaths and injuries. The Allies called the battle ‘little Cassino’. Plaques in Italian, English and German commemorate the dead on all sides.

Just a short distance away, in the Apennine area between Brisighella and Casola Valsenio, we recommend a visit to Ca’ Malanca, theatre of a bloody battle between the partisans and the German troops in October 1944 now seat of a museum with attached library and educational and residential centre. For an understanding of the places where these historical events took place and for a nature walk we recommend the Sentiero dei Partigiani (partisans’ footpath) circular route which takes around four hours and starts at Ca’ Malanca.

Continuing along Valle Santerno takes you to the border with Tuscany and thus to the places where the Allied breakthrough of the Gothic line happened.
Just over the border between Romagna and Tuscany, in Moraduccio and 2 km further on in Ceretola di Coniale, you get to the Santerno Valley Commonwealth War Cemetery on your left where the 287 soldiers who died in the winter of 1944-45 in the battles along the Santerno valley are buried.

Further on once more you get to Firenzuola, gateway to Tuscany for travellers coming from Imola.
There is a great deal of evidence of the war and the battles fought here along the Gothic Line in the area – barracks and a number of heavy gun positions are still visible in the Montecarelli area on state road 65.

The most important monument is to be found after 13 kms in the direction of Passo della Futa, the largest German war cemetery in Italy, where the 32,000 soldiers who died defending the Gothic Line are buried. Opened in 1969 it is the work of architect Dieter Oesterleen.

Lastly, at Passo del Giogo is the Monte Altuzzo Memorial commemorating the men of the 5th American Army, 85th Infantry Division, who fell in the battle which finished on 18th September 1944 with the American breakthrough on the defensive line which crossed from the Adriatic to the Tyrrhenian.
The fall of Monte Altuzzo marked the start of the German retreat to the Santerno.