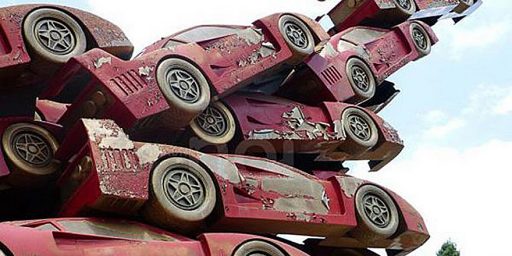 Start from the Tourist Information Office on Gramsci square.

Go down via Mazzini, and keep going straight ahead along viale Dante as far as the main entrance to the Autodrome, marked by the monument dedicated to Enzo Ferrari and to his son, Dino, by the French artist Arman. From the monument, turn right following the cycle path that goes down through an underpass and up again to the left , leading you to an open area at the back of the grand stands that is generally closed to the public on big events. Carry on, and after a slope, you’ll get to the upper part of the circuit (called Variante Alta); then turn left into via Dei Colli and skirting the race-track you’ll get to the famous Rivazza curve. Keep following the race-track from the outside along via Ascari and then straight ahead along via Nuvolari; at the crossoroads turn right into via Musso and you’ll find yourselves back again inside the circuit area: after the underpass you’ll have a fantastic view over the paddock area. Go down via Musso as far as the soccer stadium, which hosts the helicopter field on big events: turn left and then right so as to enter the proper Parco delle Acque Minerali.

This beautiful historic park is worth a visit and one can easily cycle through it, but we’ll stick to our theme and will carry on straight ahead following the cycle path : the race track and the new chicanes are now in full view. The path will lead you also to the monument dedicated to the memory of Ayrton Senna, who died in Imola in 1994 during the Grand Prix. The same path will take you out of the park, through the gate, onto via Kennedy and then up to the famous Tamburello curve where the cement stands are open to visitors. Go back from the same way you came: at the stadium, keep going following the path down under the bridge and then up to the other side, and you’ll find yourselves just in front of the main entrance to the circuit.