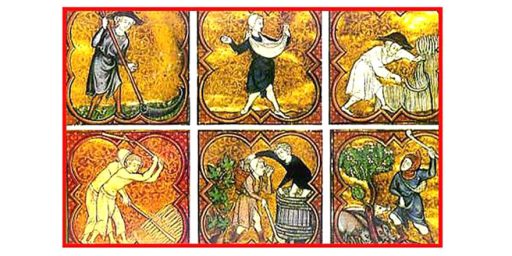 Let’s continue our journey through the Middle Ages. In this period many lords laid claim to Imola and a great number of wars were fought here. To protect itself, the city dug moats and built walls and gates only one of which has survived: Porta Montanara. One of the warriors of the day, Taddeo della Volpe, was born in Casa della Volpe, a residence which was built as a fort.

How were medieval knights armed? There is a carved slab of stone in San Domenico Church on which you can see a knight, Colaccio Beccatelli on horseback and fully armed. Next to the church is the ancient convent of San Domenico which is now the site of the city’s museums, the archaeological collections, Museo Scarabelli and the art gallery, a collection of paintings from the Middle Ages to modern times.
There is another church near the Domenican convent which is now the entrance to the city library but many centuries ago it was the Church of San Francesco and you can still see the frescoes on the ground floor. It was certainly a very attractive church. Let’s go into the library and ask to see the ancient eighteenth century library. I could stay in there for hours. There are more than 13,000 books covering all the walls and little spiral staircases to access the upper floor.

Let’s leave now for the Sforza Castle which dominates the city. When it was built in the second half of the thirteenth century it had two square towers which were much taller than they are now because the castle had to resist the attacks of knights armed with swords, bows and crossbows. When firearms developed in the fifteenth century, military engineers had to design new defence methods. They lowered and fortified the walls, enlarged the moat which was kept full of water at all times and reduced the number of towers and made them circular so that cannon balls would bounce off them. If we have a look at the southeast tower and examine the roof of the gunroom we find a shield with a flower and serpent which was the coat of arms of two very important characters: Caterina Sforza and Girolamo Riario. Caterina and Girolamo ruled Imola in the Renaissance period when the city was one of the most attractive in Romagna. We’re now in front of Albergo El Cappello which Girolamo had built for his important guests with many rooms, stables and grain warehouses. After a triumphal entry to Piazza Matteotti with Palazzo Riario – now Sersanti – overlooking it we’re in the place where Girolamo and Caterina dealt with their most important business. It was my lord Cesare Borgia who defeated Caterina Sforza and took the city from her.

Let’s see where my glider lands next. We’re in the eighteenth century now and we’ll take the historic Via della Fortezza now Via Garibaldi. We’ll go and meet the old count Giorgio Barbato Tozzoni as there’s no-one who can show us the residence museum Palazzo Tozzoni which his family lived in better than him. He’ll tell us how his ancestors beautified the house in the first half of the eighteenth century with its elegant staircase, hall for social events and a beautiful apartment to accommodate popes and kings.
Has anyone got a fever? In the eighteenth century the only chemist was the Farmacia dell’Ospedale. Its herbs, minerals and medical substances weren’t kept in drawers but in those beautiful white and blue ceramic pots along the walls. Each pot had a ‘label’ and if you look closely you’ll see that there are some strange cures in them.

Let’s go and meet the mayor of Imola in his office in the town hall. The city has been ruled from this building since the beginning of its history but its current appearance dates to the eighteenth century. After climbing the staircase used for official ceremonies we get to the most important apartment, the one overlooking Piazza Matteotti. Sumptuous furniture, decorations, precious objects – all this was designed to remind anyone who went in that they were in the most important building in the city.
In San Cassiano Cathedral we’ll meet the Bishop. This church which hosts the city’s main religious services was built in ancient times in 1187 and it was transformed in the eighteenth century by an architect, who was a colleague of mine, at that time.