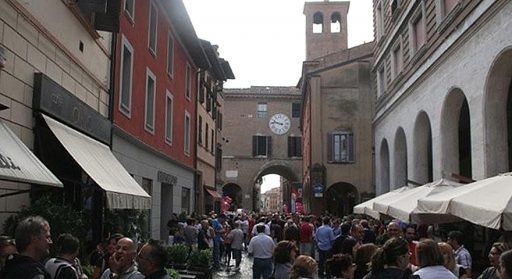 A walk through the city centre

A walk through the enchanting centre of Imola is the best way to get to know the town.
Your starting point is the Rocca, one of the best examples of military architecture of the region. After visiting the fortress, take Via Fratelli Bandiera and walk past the ancient church dell’Annunziata, now an exhibition venue: you will get to Via Emilia, the ancient decumano massimo. 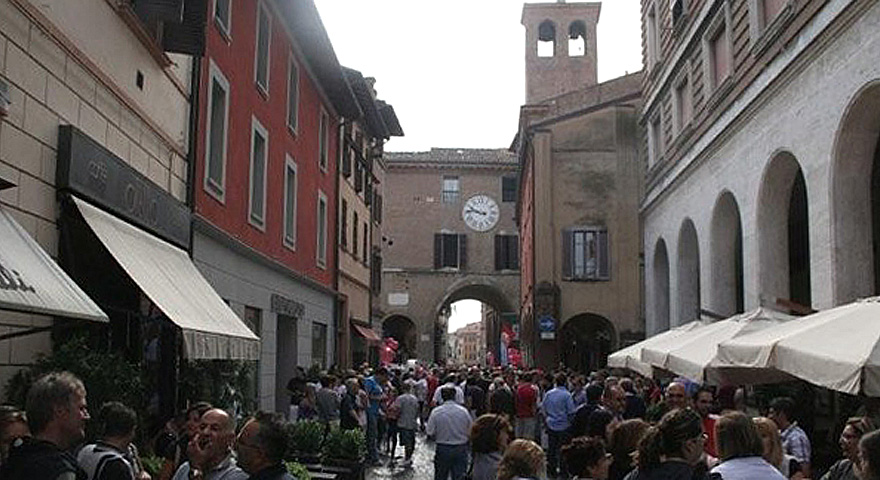 This main road is lined with refined mansions boasting pillared courtyards, monumental staircases and frescoed ceilings: at no.44 on the left-hand side, Palazzo dal Monte Casoni, followed by Palazzo Miti Zagnoni; on the opposite side at number 25 the Renaissance Palazzo Machirelli and at number 29 the 14th century home of Benvenuto Rambaldi, the first annotator of Dante’s Divine Comedy. At the intersection with Via Verdi stands the Teatro Comunale (Municipal Theatre), and further ahead, at no.80, the entrance to Biblioteca Comunale (Public Library), both hosted inside the ancient Convento of San Francesco. On returning to Via Emilia your attention is catched at no.69 by the impressive 16th century Palazzo Sassatelli Monsignani and at no.95 you cannot but stop to admire the inside of the 18th century Farmacia dell’Ospedale (Pharmacy). On the other side of the street rises Palazzo della Volpe (Albergo El Cappello) commissioned by Girolamo Riaro and completed in 1484, to better accomodate his illustrious guests.

Following Via Orsini, on the corner of Via Quarto you will notice the gothic portal of the Chiesa di San Domenico, a terracotta masterpiece by Jacopo da Cereto (1340). Continue straight through the gardens and you will get to the Convento dei Santi Nicolò e Domenico which hosts the Pinacoteca Civica (Municipal Art Gallery), the collections of Museo Scarabelli and the new archaeological museum.

On the way towards the city centre, after the crossroads with Via Cavour, at no. 84 stop to admire the Florentine style facade of the 15th century Palazzo Calderini, and back to Via Appia at no.18 the severe 13th century façade of Palazzo Pighini, the only example of medieval patrician family home remaining in Imola. You have now reached the centre of the town, with the small Piazza Caduti della Libertà (square) which, together with the larger Piazza Matteotti and Piazza Gramsci, has been the business heart of the town since Girolamo Riario re-designed it at the end of 1400. The Palazzo del Comune (Town Hall), with its clock tower, marks the very centre of town and its façade overlooks Piazza Matteotti – bounded on two sides by the typical sandstone arcades – and faces the elegant Palazzo Sersanti. Following Via Emilia towards east, on the corner of Via Cosimo Morelli is the Chiesa di Santa Maria in Regola, among the most ancient ones of the town but entirely renovated in the 18th century by Cosimo Morelli who commissioned the painting of the ceiling to Alessandro della Nave.

Through Via Aldrovandi and Via Mazzini you can easily reach Via Garibaldi where at no.18 rises one of the most fascinating museums of Imola: Palazzo Tozzoni. Continue on Via Garibaldi and you will find on your right the Duomo di S. Cassiano (Cathedral) which faces the 18th century Palazzo Vescovile (Bishop’s Palace) housing a museum displaying richly illuminated codes, paintings and holy vessels. Nearby in Via Don Bughetti is the 15th century Casa della Volpe, home of the famous Captain of the Venetian Army Taddeo della Volpe and later seat of pawnbrokers for about three centuries. Next to the Cathedral is Via Bixio leading to the 15th century Porta Montanara, only remaining gateway of the once walled town.
By crossing Piazza Bianconcini you will reach the entrance to Convento dell’Osservanza.