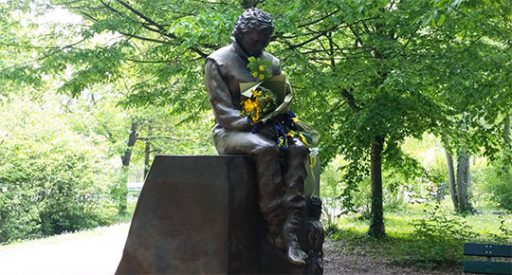 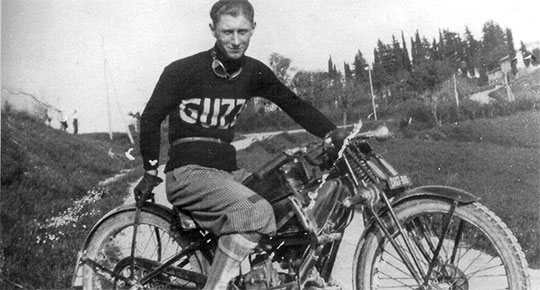 Checco Costa is inextricably linked to the Imola racetrack as a key player in the history of Imola’s motorsport and its development.
As a keen motorcycling enthusiast from a very young age, he started out in the motoring world first as a rider, competing in several official events, and then as a race organizer on behalf of the Imola MotoClub.

We owe him the idea of building a proper circuit, technically challenging as well as safer and more spectacular than earlier street circuits built on city streets.
The inspiration came to him in 1947 and as early as in 1953 the first official race of the Italian motorcycling championship was organised here.
The legendary story of Costa as a prominent figure in the world of road racing had begun.

His inventiveness and keen interest in different racing experiences helped him bring to Imola several new events including the Shell Gold Cup, the Daytona of Europe, the 200 Miles of Imola and the Nations’ Cup, reuniting the then best riders in the world – true timeless legends of the sport.

The Museum located at the entrance to the track, which opened in 2013, is named after him. 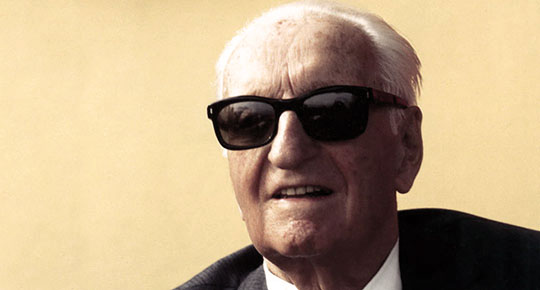 Enzo Ferrari, founder of the world-famous car manufacturing marque, is linked to the Imola track for two main reasons.

In his own words, his first contact with Imola was in 1948 when the circuit was still in the design phase: “I thought right from the start that that hilly area could one day become a small Nurburgring due to the natural difficulties that a track built there would imply – presenting a truly selective challenge for men and machines. The promoters of the Imola circuit felt comforted by my opinion. In May 1950, construction works began. […] This belief of mine has since been confirmed throughout the decades.”

The circuit was named Autodromo Dino Ferrari in 1970, in memory of the son of Enzo Ferrari, who died prematurely at the age of 24 and, after the death of Enzo himself in 1988, as a tangible sign of the affection and gratitude that Imola felt for “the Drake” as he was referred to, the circuit was renamed and has been Autodromo Enzo e Dino Ferrari since. 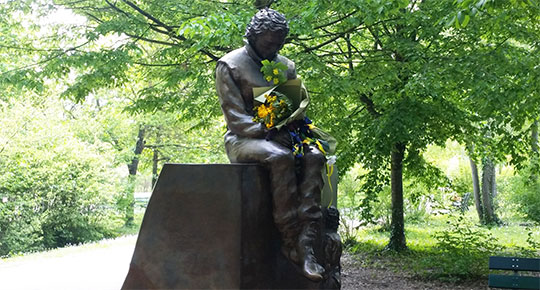 Ayrton Senna Da Silva entered the world of motor racing as a young boy, immediately showing an innate talent that in just a few years would lead him from racing in karts to driving Formula 1 single-seaters.

Still considered by many to be the best Formula 1 driver of all time, he died on the Imola circuit on 1 May 1994 following a tragic accident.
From that moment on the Brazilian champion has become a myth, a legend of world sport, so much so that the memory of him as a driver and as a man is still very much alive in the eyes of the public.

The monument dedicated to him is a bronze statue made by Stefano Pierotti; it is located inside the Acque Minerali public parc and portrays Senna in thoughtful contemplation, facing the track, towards the place where his fatal accident occurred. 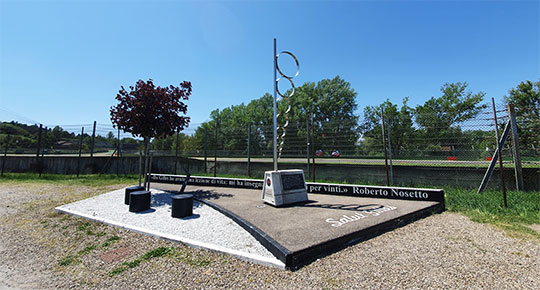 On April 25th, 1982, the much-loved Canadian driver ran his last Imola race, exactly two weeks before the Belgian Grand Prix, during which he suffered from a fatal accident.

The monument, realized by Ferdinando Forlai, was placed at first next to the Villeneuve Curve and then transformed into the Corner. Today it is ideally place in the curve that saw the pilot as the protagonist of a spectacular accident.
The current location, inaugurated on April 31st, 2016 with his son Jacques, has been supported by Sfida del Cuore Onlus, a local organization that promotes every year a charity go kart race.

The three sessions recall the Gilles’ feat at Zandvoort in 1979, when he completed an entire lap without a tyre. The writing Salut Gilles (Ciao Gilles, in Italian) is the same as that written on the Montreal circuit starting grid. The sentence on the wall has been made by Roberto Nosetto, former Ferrari Sport Director and former Director of the Imola Racetrack. The monument is illuminated with the colours of Canada, white and red and include a maple, another Canadian symbol. 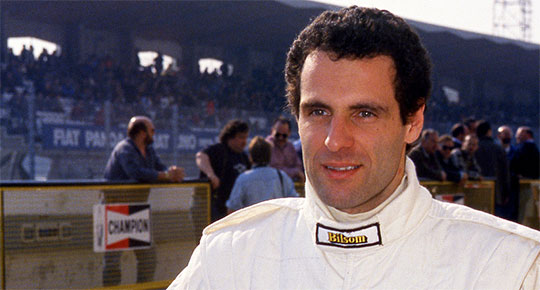 From a very young age he devoted himself to racing to achieve the dream of competing in the 1994 Formula 1.

On 30 April of the same year, during the qualifications of the San Marino Grand Prix, the third of the season, he was the victim of a terrible crash on the Villeneuve bend that claimed his life.
The following day, Ayrton Senna was also killed on the same track. That terrible weekend marked by two fatal accidents within a few hours of each other forever marked the history of motor racing and of the Imola racetrack.

Since 1 May 2004, stand B of the Tosa bend has been named in memory of the Austrian pilot. 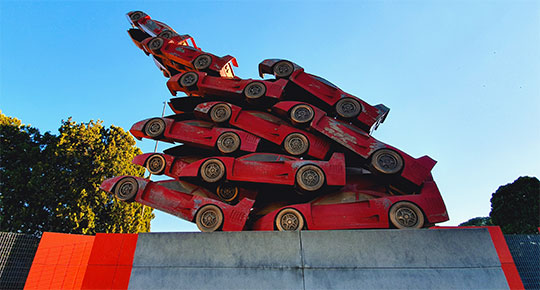 This work of art by the French sculptor Arman is presented as a bronze structure, 5 meters talla, consisting of a harmonious group of the famous Ferrari F40 model.

This sculpture intends to praise not just Enzo & Dino Ferrari but also the exterior beauty of the Ferrari car and the skilful craftsmanship that created it.

Situated at the main entrance of the Enzo and Dino Ferrari Racetrack, the monument was inaugurated on 30th April 1999.