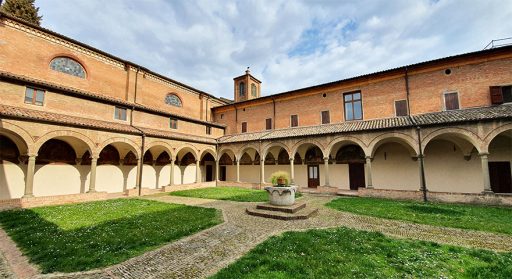 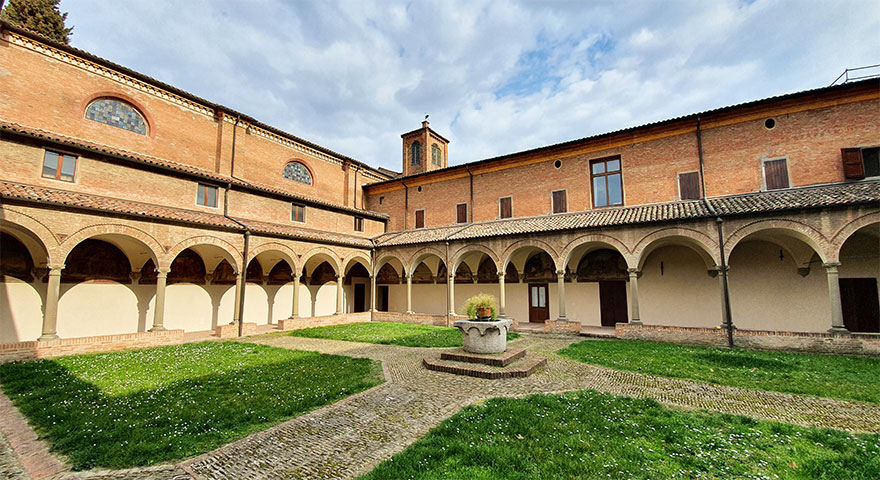 This monumental complex, which is made up of the Chiesa di S. Michele (church), The Santuario della Beata Vergine delle Grazie (sanctuary), and the Convento dell’Osservanza (convent), is the work of the Minori Osservanti Friars who came to Imola during the 15th century and settled in an area hosting already a church and a bubonic plague home.
The church of S. Michele was finished in 1472 and the two cloisters and the chapels inside the church were added later on. One of the chapels was a donation by Tomaso Feo, brother-in-law of Caterina Sforza: and in fact the funeral stone dedicated to Caterina’s sister Bianca Landriani and is still conserved outside, under a beautiful 16th century portal in front of the church.

The inside of the church was renovated at the beginning of the 20th century, but it still has a wooden crucifix dating back to the 15th century. The left aisle has a fresco representing “La Madonna Pacificatrice”, probably work of Guidaccio da Imola (1472). On the right of the church is the first cloister which was completed in 1478, while it is not possible to visit the second cloister because it is still used by the Franciscan friars who are the guardians of the complex.

In the garden, next to the church, inside a small chapel, there is a splendid 15th century “Pietà” in terracotta of Bologna or Faenza school: a group of seven life-sized statues, known as the “Piagnoni”, representing the Virgin Mary, the three Marys, St. Joseph from Arimatea and Nicodemo, who are crying the dead Christ. This latter one is the only statue which is not authentic because the original one was broken in the 19th century.

Church of St. Michele and Convent of Osservanza
via Venturini 2
tel. 0542.23572 Parish Church