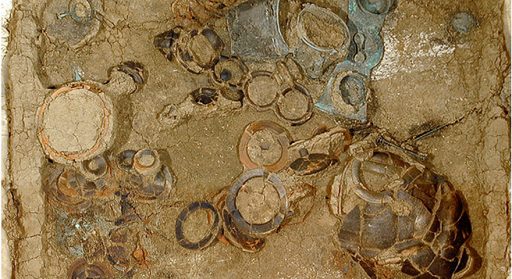 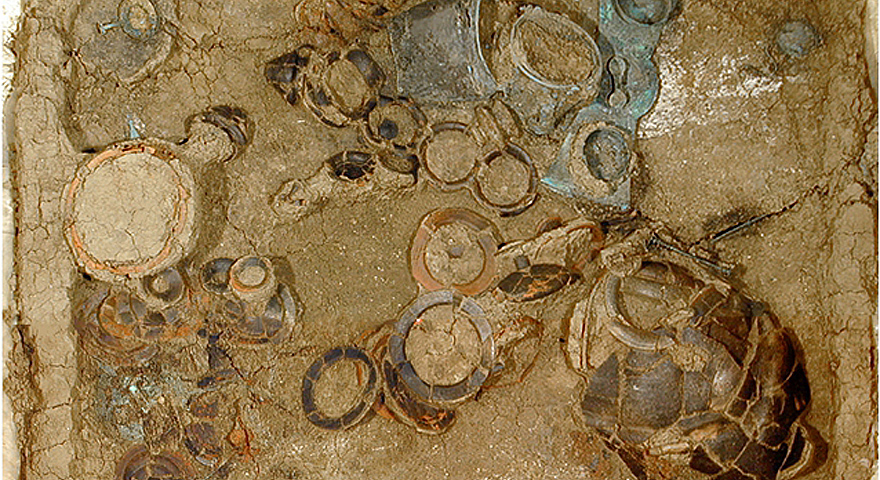 Among the most important archaeological discoveries of the last ten years in the territory of Imola are without doubt those of the Pre-Roman cemetery, probably belonging to the “Umbrians” of the VI and V century BC and to groups known as “villanoviani” of the VIII and the VII century BC. These cemeteries didn’t just contain the remains of the deceased but also a variety of personal objects and/or rituals which are precious evidence of the social role of the life of the dead and of the ideology and the rituals connected to the passing over.

Montericco
The archaeological excavation of Montericco has brought to light one of the most important necropolis of the “Umbrians” who lived in the romagnolo territory between the VI and V centuries BC. The 77 tombs, often with remains of the wood casket, were gathered to form a circle of about ten tombs, each of which most likely belonged to a family or a relative. The objects buried along with the deceased included pottery, a brooch, weapons – usually deposited in male tombs – and ornaments and utensils for weaving deposited for women. The most important tomb without doubt is number 72, which refers to a chief warrior buried with his helmet, bronze vases, a large belt, silver ornaments, 21 spear or javelin heads, 3 knives and finally 2 vases with black figure decorations which were probably imported from Greece.

Orto Granara e the project ‘The escavation at the Museum’
In 1998 in the quarry of Orto Granara (Municipality of Castel St. Pietro) a group of exceptionally large cremation tombs of “villanoviane” dating to the VIII and VII centuries BC were uncovered. The Museums of Imola, intentioned not just recuperate but also to valorise this discovery, realised a project entitled “The Excavation at the Museum”: which consisted in transferring not just the tombs to the Museum but also the excavations carried out in recuperating them. This specially made laboratory inside the museum has permitted hundreds of citizens and students with special guides to visit it. It has been possible to experiment advanced information techniques and to recuperate important and rich funeral outfits.

Pontesanto
Between 1999 and 2000, the ruins of a village and another “villanoviana” tomb were discovered in Pontesanto – a suburb of Imola. The same techniques used in recuperating Orto Granara were also used here and precious information was gathered about the pre-Roman communities and the funeral rites. The works of restoration have begun and a project to set up a large exposition of Orto Granara and Pontesanto is now being studied, to set up the first part as a permanent exhibition in the new museum which is located in the first cloister of the San Domenico.